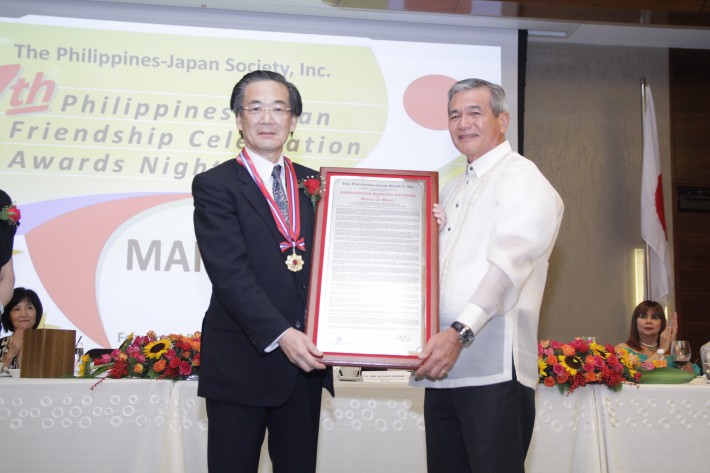 In his Opening Remarks, President Francis C. Laurel noted that the first treaty between the Philippines and Japan on Trade, Amity and Navigation was signed and ratified in 1973, while the second, the Philippines-Japan Economic Partnership Agreement was signed in 2008 or 37 years later. He said that the “latter has become the new platform for our two countries to work together to achieve a mutually beneficial future”.

He then stressed that these milestones in the two countries’ bilateral ties “would not have been possible had it not been for the hard work of a few good men”. “One of these is our awardee in the person of Ambassador Makoto Katsura, whose tireless dedication ultimately produced the Philippines-Japan Economic Partnership Agreement,” President Laurel said.

Ambassador Kazuhide Ishikawa, the current Ambassador Extraordinary and Plenipotentiary of Japan to the Philippines also conveyed his greetings and appreciation to the Philippines-Japan Society for hosting this annual dinner and awards night for the last 37 years. He said that he had attended one such dinner in 2013 as a member of the official entourage of Prime Minister Shinzo Abe who was then visiting Manila and who upon arrival at the Ninoy Aquino International Airport immediately proceeded to the Intercon Hotel to address the 35th Philippines-Japan Society Friendship Dinner. He added that he never thought then that he would one day address the same Annual Dinner as Japan’s ambassador to the Philippines.

Atty. Jose Vicente Jimenez, Corporate Secretary of the Philippines-Japan Society read the 1,189 worded Citation, while Ambassador Makoto Katsura stood at the dais, flanked by his wife, Mdme. Yasuko Katsura, Mr. Francis C. Laurel and Mr. Gerry B. Sanvictores, President and Vice-President respectively of the Philippines-Japan Society. The Medal of Merit was donned on Ambassador Katsura, assisted by Mdme. Katsura. The Plaque with the Citation engraved thereon was also presented to Ambassador Katsura.

Thereafter, Ambassador Katsura delivered a heartfelt Response, the full text of which can be read at this link.

The program thus ended, commemorative photos were taken which can be viewed at this link: 37th Philippines-Japan Friendship Celebration Photo Gallery.

Mr. Raymond C. Sanvictores served as the Master of Ceremonies.

1The Philippines-Japan Medal of Merit is conferred annually to Filipino or Japanese nationals who have distinguished themselves in the promotion of friendship, trust, understanding, goodwill, mutual respect and shared benefits. See Medal of Awardees