The Philippines Japan Economic Cooperation Committee (PHILJEC) and The Philippines Japan Society (PJS) hosted a cocktail reception on July 10, 2017 for new BSP Governor Nestor A. Espenilla, Jr.. Governor Espenilla was a Monbusho Scholar of the Japanese Government from 1986-1988 for his Master in Policy Science degree from Japan’s premier National Graduate Institute for Policy Studies (GRIPS).

In his speech titled, “The Philippines and Japan: Enhancing Strategic Partnership”, Gov. Espenilla recalled his experiences and insights as a Monbusho scholar 31 years ago.

Another insight Gov. Espenilla shared was his observation about Japanese culture and how it emphasizes cultivating a sense of self vis-à-vis others and society. “I believe this emphasis on harmony and collaboration accounts for our countries’ long-standing relationship. Cooperation between our nations has paved the way for the advancement of our economic and trade relations.”

Under his term as BSP Governor, Gov. Espenilla said that he would ensure that an enabling monetary and financial environment is maintained to achieve the country’s growth objectives, while safeguarding price and financial stability.  He also talked about the increasing presence of foreign banks, in particular 5 Japan-based banks in the Philippines and how this would facilitate the flow of investments, promote trade, support business expansion, and encourage technology transfers, that may lead to more job creation and more productive output. Against this backdrop, Japanese investors in the country can look forward to expanded opportunities for growth and investments.

May 16, 2015by Philip Sanvictores in PJS tagged Philippines Japan Society

On February 5, the Mission is scheduled to pay a courtesy call on President Benigno S. Aquino III at the Malacañang Palace.  Thereafter, the group will proceed to the Shangri-La Makati for a luncheon jointly hosted by PCCI and PHILJEC.  In the afternoon, a two-part Dialogue with the Mission will be held where several topics will be discussed:

Part 1 – Dialogue between JCCI and PCCI-PHILJEC on:

Part 2 – Dialogue between JCCI and the Philippine Government on:

On February 6, the Mission will tour several industrial estates in Laguna.

The keynote speech was delivered by Finance Secretary Cesar Purisima who revealed the major components of the “Cebu Action Plan” for regional financial integration which will be presented at the APEC financial ministers meeting in September.  He said he had discussed this earlier in Hong Kong and more recently in Davos, Switzerland.  http://asia.nikkei.com/Politics-Economy/Economy/Philippines-to-accelerate-goods-trade 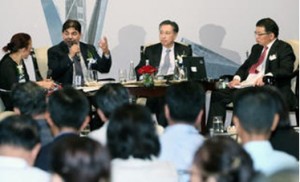