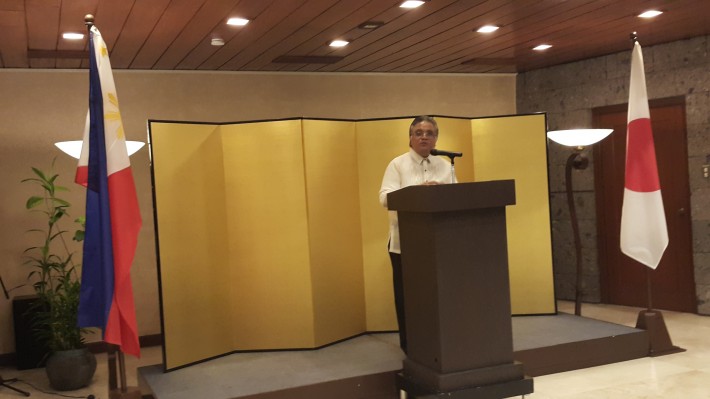 Speaking in behalf of PHILFEJA, President Philip B. Sanvictores expressed his sincerest gratitude to His Excellency Ambassador Kazuhide Ishikawa for hosting the Annual Dinner for Former Filipino Students in Japan and for recognizing the value, achievements, and work of former Filipino ryugakusei. The dinner was held at the Ambassador’s residence last April 14, 2016.

Below is the transcription of President Sanvictores’ extemporaneous speech:

On behalf of the PHLFEJA I would like to express our sincere gratitude and thanks to the Embassy of Japan led by His Excellency Ambassador Kazuhide Ishikawa, and his dynamic and friendly team at the Embassy, for hosting this annual dinner for former Filipino students in Japan.

Hosting this dinner, this annual dinner is a recognition of the achievements and work of Filipinos whom you have educated and trained in Japan. And by being here, we also express our thanks and gratitude not only for the fact that you spent for us to study in Japan, some as your scholars, others as your trainees, and (still) others as students on their own, but more so because you put value to our being former students (in Japan) in the work and professions that we pursue. And, to us this is very important and much appreciated …”

President Sanvictores also highlighted the continued support of the Japanese Embassy and the Japan Foundation not only to PHILFEJA but also to the ASEAN Council of Japan Alumni (ASCOJA). He recalled specific instances during the ASCOJA 2015 Conference that demonstrated just how the Embassy of Japan and Japan Foundation have truly been dependable partners of their organizations:

“Min. Ueno made mention of the ASCOJA Conference held last October (2015) and I would like to take this opportunity to express once again, and in this particular occasion, the strong support and hard work that the Embassy of Japan extended to PHILFEJA. There were many side issues around that conference – like for instance the fact that (former) Prime Minister (Yasuo) Fukuda became our guest of honor; my goodness, the Embassy (of Japan) was really involved all the way from preparation up to departure. The program that we to put together – the Embassy was always involved in supporting us and I would say they facilitated it, not only with financial contributions of (the) Japan Foundation which was allocated from Tokyo. All these are concrete evidences or concrete occasions where Japan through its Embassy in the Philippines continued to express the value of former students, former ryugakusei and the trainees, to current Philippines-Japan bilateral relations; not only in the bilateral field, but also in supporting us in our multilateral ASEAN-Japan relations.

I am happy to say that the conference was a huge success and it is all because of everyone’s support – my colleagues at PHILFEJA worked hard; but our support from the Embassy and the Japan Foundation should be mentioned because without their support, we would not have achieved the same level of success.”

“I would like to also take this opportunity to present the Conference Compendium, to the Embassy of Japan, to Ambassador Ishikawa and Minister Ueno. We prepared a close to 200-page Compendium. It is a chronicle, a record of what transpired in those three days. And this is not to just say that this is what we accomplished; (rather,) more so I think this is something that we can look forward to, to prove that there is much to accomplish from now on, especially for future generations of Filipino and ASEAN students and trainees in Japan.

And so, I would like to take this opportunity to present to Min. Ueno, a copy of (the) Compendium, and we will give you more copies because we printed quite a lot.” (Presents the Compendium to everyone’s applause.)

After presenting the ASCOJA 2015 Conference Compendium, President Sanvictores shared his and other former ryugakuseis’ once-in-a-lifetime encounter with Their Majesties Emperor Akihito and Empress Michiko at the San Diego Gardens in Intramuros, Manila. The historic Imperial Visit was held on January 26, 2016:

“The good Minister also mentioned the visit of Their Majesties, the Emperor and Empress of Japan last January. And again, we were honored – former students – to be given 30 minutes of an audience in Intramuros with Their Majesties. We can talk all night about our experience; we can talk all day and for many months and I will continue to talk about it to my children and grandchildren, because it is a once-in-a-lifetime opportunity to be able to welcome Their Majesties and be able to mingle with them, to experience them mingling with former foreign students (in Japan). I found that experience to be not only extraordinary but very gratifying to know that Their Majesties are truly interested in Filipinos who studied in Japan. 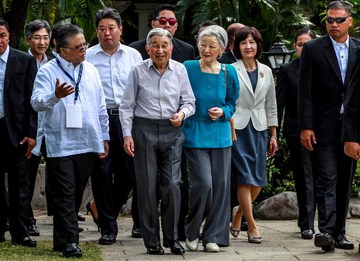 And as I was escorting them out to their vehicle, they thanked me for introducing the (Filipino) ryugakusei. It was supposed to be the other way around. We should thank them for the signal honor. But they have honored not only the former Filipino students (in Japan); they honored our country, the Philippines with their visit. And being part of that, even for (just) those precious 45 minutes was really a once in a lifetime experience that we will all cherish.” 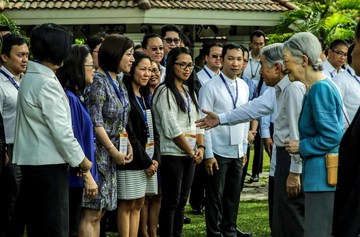 Towards the end of his speech, President Sanvictores summed up what it means to be a ryugakusei and assured the audience that the relationship between The Philippines and Japan will continue to strengthen and deepen:

“To me, that is at the heart of Philippines-Japan relations. And we, through the Embassy and our friends in Japan in the Philippines – we really have a strong partnership. And we can look forward with hope that our relationship will only be stronger.

And this is what being a ryugakusei is all about. That from generation to generation, we can be assured that friendship between our countries and our peoples will continue to strengthen and deepen.

Minister Ueno, thank you very much for this evening. We are all so blessed and honored to be invited.