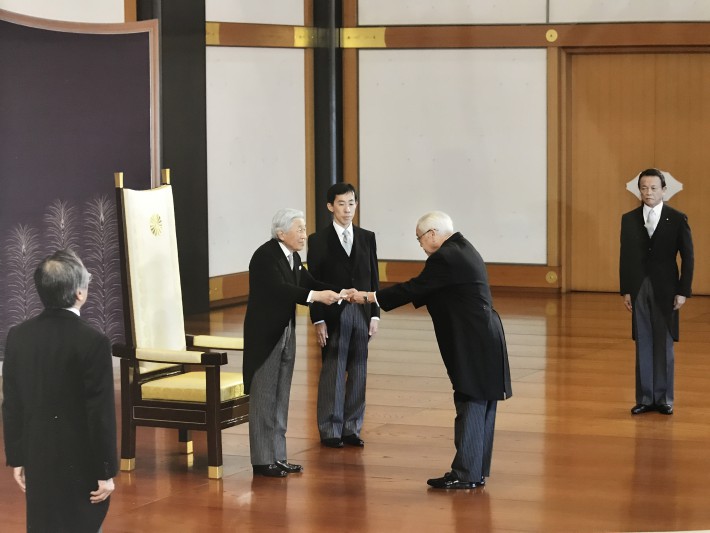 Deferentially addressed as “Governor” – he was Provincial Governor of Batangas from 1980 to 1988 – Jose “Joey” C. Laurel V is also an accomplished business executive and acclaimed civic leader, with extensive involvement in Japanese affairs and relations.

On September 16, 2016 President Rodrigo R. Duterte appointed Governor “Joey” to be the Philippines’ Ambassador to Japan, then asked him, as Ambassador-designate, to be part of the Presidential Delegation when he made his first State Visit to Japan on October 25-27, 2106. Then, on December 7, 2016, the bi-cameral Commission on Appointments speedily and unanimously confirmed his appointment and on April 5, 2017, he officially began his tenure as Philippine Ambassador-designate to Japan.

On June 9, 2017, H.E. Jose C. Laurel V presented his credentials as the Philippine Ambassador to Japan to His Majesty Emperor Akihito, in formal rites held at the Imperial Palace in Tokyo.

The official photo of Ambassador Laurel V presenting his credentials to the Emperor is a poignant image of a life journey destined towards a pivotal role in Philippines-Japan relations. It marks a new milestone in the generations-long association of the Laurel Family with Japan.

The new Ambassador first set foot in Japan as a toddler when the Laurel family was exiled to Nara as Japanese forces were retreating from the Philippines.  A grandson of Jose P. Laurel, President of the Second Philippine Republic (1943-1945), he and his elder brother Tony had to be brought to Japan by their parents, Jose III and Beatriz (Betty) with the rest of the Laurel family as innocent exiles.  Joey was not even 2-years old.

Some twenty years thereafter, in 1965, his father was designated Philippine Ambassador to Japan who served until 1971.  Ambassador Jose S. Laurel III, the quintessential Filipino diplomat to Japan, lived an extraordinary life deeply immersed in Japan and its people: he was the only Filipino and one of just a few foreigners to graduate from the elite Japanese Imperial Military Academy (陸軍士官学校) in 1937; a Filipino patriot who served before, during and after the war with his own life; Ambassador Extraordinary and Plenipotentiary of the Philippines to Japan; founder and principal architect of the Philippines-Japan Society and its network of organizations dedicated to the promotion of  peace, friendship and cooperation between the Philippines and Japan.

It was therefore natural for the children of Ambassador Laurel III to gravitate towards Philippines-Japan affairs, themselves becoming active advocates of the principles and aspirations of their father. Following the footsteps of his illustrious father as Philippine Ambassador to Japan, the first son called to serve in the same post as his father, Ambassador Joey Laurel is not only eminently qualified and extensively connected in Japanese business and official circles, perhaps most importantly, he is now a lead bearer of his forebears’ unsullied reputation and, especially that of his father, Jose III, in Japan.

On his own, Ambassador Laurel V has gained prominence in the country’s business and civic circles.  He has held top management positions in many large companies, including among others, Toyota Batangas City, Inc., YKK Philippines, Transworld Trading Co., Inc., Philippine Petrochemical Products, Asian Chemical Corporation, and the Lyceum Press.  Besides his Chairmanship of the Philippines-Japan Friendship Foundation, he is an Adviser to the Philippines-Japan Society, Trustee of the Philippine Institute of Japanese Language & Culture and the Nihongo Center Foundation, former Chairman of the Philippine Red Cross (Batangas Chapter), and was a member of the Rotary Club and Lions Club of Batangas, Knights of Rizal and Manila Jaycees Senate.

At the onset of his Ambassadorship, he said, “My role in Japan is to continuously improve closer relationships with the Japanese, not necessarily お金だけ(okane dake)’ but real 心と心(kokoro to kokoro)’ understanding,”. Already a public servant in his younger days (as Governor of Batangas), Ambassador Laurel V is the latest member of the famed Laurel family to continue their legacy of service to God, country and people:

As Philippines-Japan relations chart an even closer, friendlier strategic partnership in all aspects of geopolitics, trade, investments, security, culture and arts, people-to-people exchange, Ambassador Jose “Joey” C. Laurel V – along with the professional corps comprising the Philippine Embassy in Tokyo – faces the enormous challenge of serving as the country’s top diplomat in Japan, and lead bilateral efforts in bringing the two countries’ durable relations to the next higher level.