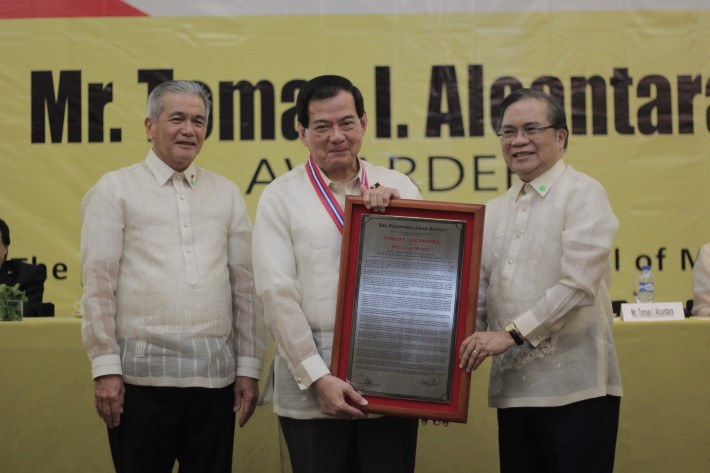 The Alsons Group was founded in the mid-1950s by Mr. Alcantara’s father, a pioneering businessman who had a vision of tapping the rich natural resources of Mindanao. The group has since grown into a diversified conglomerate that is heavily invested in energy, power generation, property development, agribusiness, aquaculture, information technology and allied industries – mostly operating in Mindanao. The group has been and continues to be a reliable and durable business partner of many major Japanese corporations.

A prominent business leader in his own right, Mr. Alcantara has also served in the Government as Undersecretary of Trade & Industry from 1986 to 1995 where he headed the Industry and Investments Group and was Managing Head of the Board of Investments. In 1996, Mr. Alcantara was designated Ambassador – Special Envoy of the President of the Republic of the Philippines for the Asia-Pacific Economic Cooperation (APEC) which the Philippines hosted in 1996. He currently serves as the Chairman of the APEC Business Advisory Council (ABAC) Philippines, having been appointed as member last December 2016 and elected January 2017.

Read the full Citation of the Medal of Merit presented to  Mr. Alcantara here.

In his acceptance speech, Mr. Alcantara expressed his surprise at receiving the award and how honored he felt to join the prestigious roster of Medal of Merit awardees. He also confirmed continued support and interest in Japan and in strengthening both business and cultural ties between the two countries:

“My exposure to the ways of the Japanese in the areas of culture, business, the country and the food came from my father and the Japanese business associates whom he dealt with in Davao in the mid-fifties.  Then, and until now, our Group’s business association with Japan continues to flourish and have, in fact, expanded by many multiples.”

“Japanese companies are certainly not strangers to the region, having played a pivotal role early on in the economic development of the island.  Mindanao currently has several partnerships between Japanese and local business groups. Rest assured, that I will remain committed to ensuring that the mutually-beneficial partnership between our two countries continues into the next decade and beyond.”

“Again, I go back to this award that has been bestowed upon me in your presence this evening.  I feel much honored, and even more honored in the thought that I join a very prestigious list of awardees that have come before me.  Being in the same list of esteemed personalities as former prime ministers, ambassadors, high ranking government officials and pillars of business in both countries can indeed be intimidating and a humbling experience.”

PJS President Francis C. Laurel, gave the opening remarks for the evening. Ambassador Makoto Katsura, President of The Philippine Society of Japan, and H.E. Koji Haneda, Ambassador Extraordinary & Plenipotentiary of Japan to the Philippines also spoke at the event.

¹The Philippines-Japan Medal of Merit is conferred annually to Filipino or Japanese nationals who have distinguished themselves in the promotion of friendship, trust, understanding, goodwill, mutual respect and shared benefits. See list of Medal of Merit awardees.