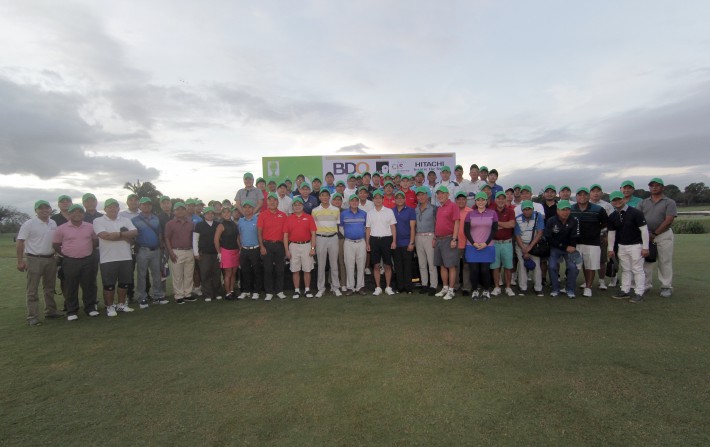 PJS held its 40th Philippines-Japan Friendship Golf Tournament last February 18, 2018 at The Country Club, Santa Rosa Laguna with the new Ambassador of Japan to the Philippines, H.E. Ambassador Koji Haneda, as this year’s honored guest. Ambassador Haneda took the Ceremonial Tee Shot at exactly 6:10 a.m., which officially opened the tournament. After the tee off, the Tournament Group Photo was taken and the different teams headed to their respective holes to start the game.

Similar to previous years, this year’s tournament was also a Scramble (Best Ball) honesty game format made up of four-man teams where each team played alone with no one checking Team scores. This year’s Champion was the team of Edwin Umali, Komoda Takahisa, Eddie Jose, and Fumihiko Harada with a gross score of 67, less the team handicap 5 for a net score of 62.

The team of Koyama Yuji, Okubo Atsushi, Feliciano Torres, and SP Sumulong took the 1st Runner Up trophies with their gross score at 73, less their team handicap of 10 for a net score of 63. Finally, the team of Joey Coronel, Alex Cabrera, Arthur Chung, and Hiromi Shimoda finished the game as 2nd Runner Up winners with their gross score of 67, less the team handicap 3 for a net score of 64. All the members of the winning teams will have their names etched on their trophies, which will be displayed at the PJS head office in Makati.

At its 40th year, The Philippines-Japan Friendship Golf Tournament continues to be a much-awaited annual tradition aimed at fostering friendship and cooperation between Filipinos and Japanese. Players were allowed to form their own teams with at least one Filipino or one Japanese member and a maximum of four players. Mr. Joseph “Jun” Uy, Jr., heads the tournament as Chairman and Mr. Raymond M. Abaquin, as co-Chairman.