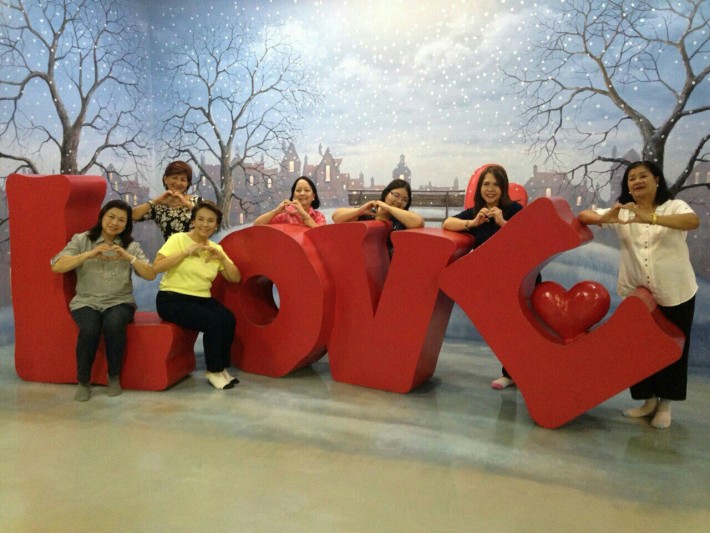 Known as an interactive 3D museum, Art in Island has gained popularity as it allows visitors to “play” with the artworks. With an entrance fee of P500 (P400 for seniors), people can spend the entire day being creative with their “selfies” since the artworks are mostly 3D murals that present either historical locations and landmarks like the leaning tower of Pisa and Trevi Fountain in Italy or art installations that create optical illusions such as Michael Angelo’s Creation of Adam.

“The museum had almost everything from Disneyland scenarios to the current characters. It also depicted scenes from Rome and Venice, Italy and old scenes, waterfalls and inverted like rooms,” said Mrs. Loinaz.

PJLA members who participated in the activity enjoyed taking photos and walking through rooms with wall-to-wall artwork and hallways filled with famous paintings given a twist. After the morning museum trip, the ladies got more boding time during lunch in the area.

Asked about their overall experience, Mrs. Loinaz recalled, “The experience we had in the museum was taking photos with different 3D artworks making it look so real through the lens. The museum was clean, had good lighting and worth the price. Our expectations were not much but to our surprise we enjoyed it.

With recommendations coming from its members and interesting feedback about the museum, the association decided to visit Art in Island for their September activity. “The activity was fun and something different. I think PJLA can visit other museums as well since it is a good bonding activity among the members,” she concluded.

For October, PJLA will hold a Filipino cooking demonstration that will be presented by one of its members, Mrs. Regine Velasquez-Alcasid.