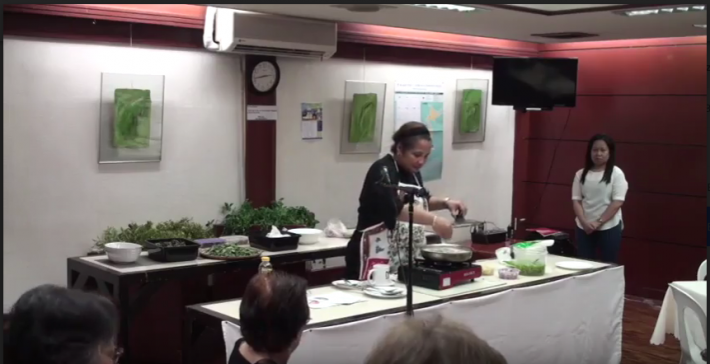 Modern Filipino dishes take many forms and different versions of traditional recipes are aplenty that sometimes it’s hard to know how a particular dish should taste. That’s why it was a real treat for PJLA members to learn the history and traditional recipe of a well-loved Pinoy dish, Bicol Express, during the group’s Filipino Cooking Demonstration held last September 28, 2017.

Complete with all the essential ingredients that make for a truly authentic Bicol Express like pork belly, shrimp paste (bagoong alamang), and coconut milk, Mrs. Glenda T. Ferma shared her family recipe to the curious audience that afternoon at the Ambassador Jose S. Laurel III Hall in Makati City. Also a PJLA member, Mrs. Ferma opened her cooking demo with a bit of history—how the famous dish was actually invented in Malate, Manila by Cecilia “Tita Cely” Villanueva Kalaw who is originally from Los Baños, Laguna and named after the train that travels from Manila to Bicol. There is another anecdote, Ms. Ferma says that tries to makes sense of the name by saying that the dish is so spicy, one needs to run super fast—thus the word “express”—in order to tame down its spiciness.

So what’s the secret to a delicious Bicol Express? According to Mrs. Ferma, use long, green chili peppers (siling haba) instead of the Philippine bird’s eye pepper (siling labuyo). She explained, Bicoloanos only use the labuyo as garnish and for extra color. Another technique she shared is to slice and soak the green chilies in water if you want to remove some of the heat and end up with a milder version. Also, don’t forget to use ginger to balance the flavors of the shrimp paste and coconut milk.

Using the same Bicol Express dish as the base, Mrs. Ferma also showed how you could create another popular Bicolano dish, Laing. It is made with the same essential ingredients as Bicol Express but dried taro leaves are added to the pork mixture. “When cooking laing, never stir the leaves once you’ve placed them in the pot,” reminded Mrs. Ferma. Taro leaves contain calcium oxalate, which can leave an “itchy” sensation in the mouth. It is an old-school belief that you can prevent this by not stirring the dish while it’s cooking.

For video of the cooking demo, please refer to our related sources.