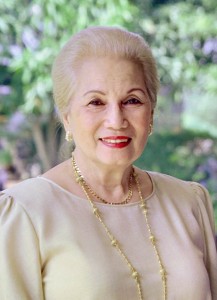 Mrs. Betty Laurel was a young mother of two (Tony and Joey) when she joined the Laurel family to exile in Nara, Japan as the Pacific War was coming to a close.  She endured the separation from her husband Jose III who was incarcerated with his father, President Jose P. Laurel, Speaker Benigno S. Aquino, Sr., Amb. Jose Vargas and others in Sugamo and Kamioka prisons in Japan.

When her husband was released from incarceration by virtue of a Presidential Pardon, she focused on raising their children.  She joined her husband to Tokyo when he was designated Ambassador Extraordinary and Plenipotentiary of the Philippines to Japan in 1966.  She was always beside her husband in all his official duties.

Mrs. Laurel was a constant, faithful and loving helpmate to her husband, devoted mother to her eight children, doting grandmother to her many grandchildren, a true friend to both Filipinos and Japanese.