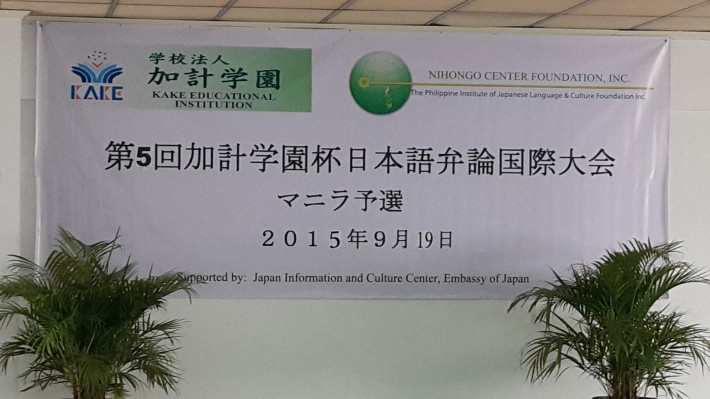 There were nine contestants who prepared their own speeches in Nihongo on the theme: “My Message to the Future”未来へ伝えたいこと. Ms. Camille Valerie Torre of the NCF/PIJLC N1 Review Class who has been a student of NCF since 2006 won first place, entitling her to represent the country in the Final Competition in Okayama, Japan to be held on November 25-29, 2015. She was also granted 2-year scholarship at any of the three universities under the Kake Educational Institution System.

The second place was awarded to Ms. Jacqueline Okaya of the NCF/PIJLC Teacher Training Course, while Ms. Carmel Acuzar of the Intermediate 1 Class won third place.

The panel of judges consisted of Director Tatsuo Kitagawa of the Japan Information and Culture Center, Embassy of Japan, Dr. Takuji Hoshino of the Okayama University of Science, and Prof. Kenjiro Ogata, Academic Advisor of NCF-PIJLC.

Mr. Philip B. Sanvictores, NCF-PIJLC President delivered an extemporaneous speech on the merits of participating in and preparing for a speech contestat the start of the Program. He was followed by Dir. Kitagawa who praised Kake Gakuen for hosting the international speech contest and thanked NCF-PIJLC for partnering with Kake Gakuen on this worthwhile project that promotes Nihongo education in the Philippines. At the end of the contest, Dir. Hoshino thanked all the participants and encouraged all the contestants to strive hard in learning Nihongo. He added that with the high quality of speeches presented during the contest, all the participants were actually winners.

After the Speech Contest, PIJLC hosted dinner for the guests from Japan at the Barbara’s Cultural Restaurant in Intramuros. 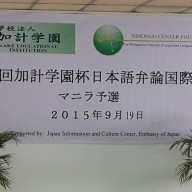 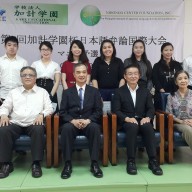 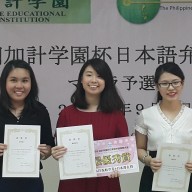 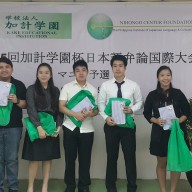