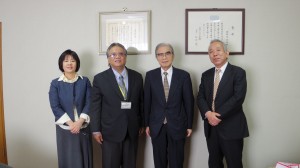 PHILFEJA President Philip B. Sanvictores called on ASJA International on 29 October 2014 at its main office in Shinjuku, Tokyo.   Secretary-General Jiro Sato, Mr. Takumi Iwamoto, Ms. Chikako Hagihara met Mr. Sanvictores and his wife, Patricia Maribel.  They discussed various matters related to the 2015 ASCOJA Conference as well as the next ASJA Board meeting to be held in Tokyo on March 27, 2015.  They however dwelt heavily on the ASJA proposal to develop and maintain a new ASCOJA online communication platform, which is being proposed for inclusion in the FY2015 budget of ASJA.

While supportive of the idea, Mr. Sanvictores said he needs to officially refer the matter to the ASCOJA Board of Governors.  In this regard, he said it may be necessary to call a special meeting on this matter.  ASJA too, would need to be part of the said meeting, he said.