The Philippine Association of the Japanese Government Scholars, PHILAJAMES, Inc. was conceived in 1972 by University of Tokyo alumni, Mr. Jovencio D. Torres, who invited 5 other ex-Monbusho (former name of Monbukagakusho) scholars. They met on a Saturday night in the summer of 1972 at the Butterfly Restaurant near the present Quezon City Memorial Circle. The five other alumni were Prof. Jose G. Diaz, Dr. Felipe P. Calderon, Mr. Cesar Lopez, Dr. Efren C. Flores and Mr. Larry M. Azurin.

Several months later, in January 1973, several alumni members met at the audio-visual room of the Japan Information Center, Embassy of Japan (then located at the Filinvest Bldg., Taft Avenue near the corner of present Quirino Avenue) to elect the officers of the Association. The former name of the Association was “Philippine Association of the Japanese Ministry of Education Scholars.” Induction of the first set of officers was hela on April 7, 1973 at the Sulo Hotel in Quezon with the Japanese Ambassador to the Philippines, Ambassador Toshio Urabe, as Inducting Officer and Guest Speaker.

The idea to incorporate the Association with the Securities and Exchange Commission was initiated during the term of Dr. Paciente A. Cordero, Jr. as President from 1978-1979. However, not until the term of Mr. Nestor D. Garcia as President in 1980-1981 was PHILAJAMES finally incorporated with SEC under Registration No. 92936. To meet the challenges of the new millennium, the Board during the term of Dr. Lydia G. Tansinsin (1997-2000) amended the By-Laws and applied for SEC approval. Approval was granted on the 27th of September 1997. During the term of Dr. Benito M. Pacheco (2002-2005), the name of the Association was modified after the ratification of its By-Laws by the members and was incorporated with the SEC on May 9, 2003.

PHILAJAMES in the new millennium has tried to attune itself to the new challenges. Its five Regional Chapters – Northern Luzon, Southern Luzon, Visayas (based in Iloilo), Cebu and Mindanao Chapters – have continued to strengthen its linkages and networks with each other and with Japanese institutions abroad. The regional Chapters have acted as central points in the nationwide celebration of the annual Philippine-Japan festivals. Lecture forums on Japanese education and scholarship programs, orientations in Manila, Iloilo, Cebu and Davao for the annual outgoing Japanese Government scholars are being conducted every March and September each year, a PHILAJAMES website was developed, and participation in PHILFEJA and ASCOJA activities has been regularly maintained. 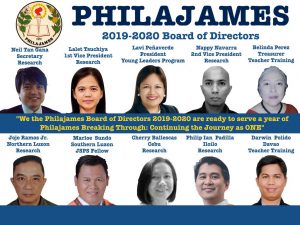