The Philippines-Japan Society Medal of Merit is the highest award within the Society’s gift to confer upon Filipino and Japanese nationals who have significantly contributed to nation-building in terms of the promotion of friendship, mutual benefit, mutual respect and closer, deeper, stronger relations between the two countries.

The Medal is made of gold-plated metal fashioned in the shape of a sun with eight rays measuring 5.5 cm in diameter with a thickness of 4 mm. A ruby stone is embedded in the middle of the medal. The Citation, on the other hand, is chemically etched on a 12 x 12-inch steel plate electroplated to a shiny copper finish, mounted on a wooden frame with narra finish. 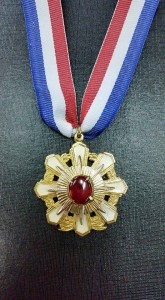 The Society conferred its first Medal of Merit in 1979 and every year thereafter, the Medal has been given alternately to a Filipino or Japanese individual.

As of 2019, there have been 42 awardees – 21 Filipinos and 21 Japanese.  These awardees are prominent business leaders and pioneers, high government officials, diplomats, and civil society organizations. All share a distinct personal contribution to the promotion of Philippines-Japan relations over the last 40 years.

The Roster of Awardees as of August 2019 is as follows:

ALFONSO T. YUCHENGCO
Former Ambassador of the Philippines
to the People’s Republic of China and to Japan
16th Awardee (1995)

SALVADOR H. LAUREL
Former Vice-President of the Republic of the Philippines
21st Awardee (1999)