Due to the uncertainty of how the issues regarding COVID-19 might develop in the Philippines, PHILJEC would like to inform all interested participants that the 38th Joint Meeting of PHILJEC and JPECC scheduled on March 12, 2020, at New World Hotel Makati is postponed.

Registration for the event is also temporarily suspended. The PHILJEC secretariat will provide updates regarding the new date of the Joint Meeting as soon as it’s available and process requests for registration fee and sponsorship refund.

Posted here is the formal announcement from PHILJEC Chairman, Mr. Gerard B. Sanvictores.

This year’s theme is “Promoting Philippines-Japan business through Innovation and Digitalization” and will welcome executives and representatives from top Filipino and Japanese companies. Hon. Ernesto M. Pernia, Secretary of the National Economic and Development Authority (NEDA), and Mr. Jaime Augusto Zobel de Ayala, Chairman of Ayala Corporation, are scheduled to deliver their keynote addresses during the event. It will be followed by a short Q&A.

There will be two plenary sessions focusing on different industries. Session 1, “Instituting Innovation in Industries,” will focus on logistics, finance, real estate, and retail. Session 2, “Promoting the Development of other Industries,” will focus on human resource training. It will also present updates on the development of smart cities like the New Clark City and will also tackle the issue of increasing the number and value of investments in manufacturing industries. 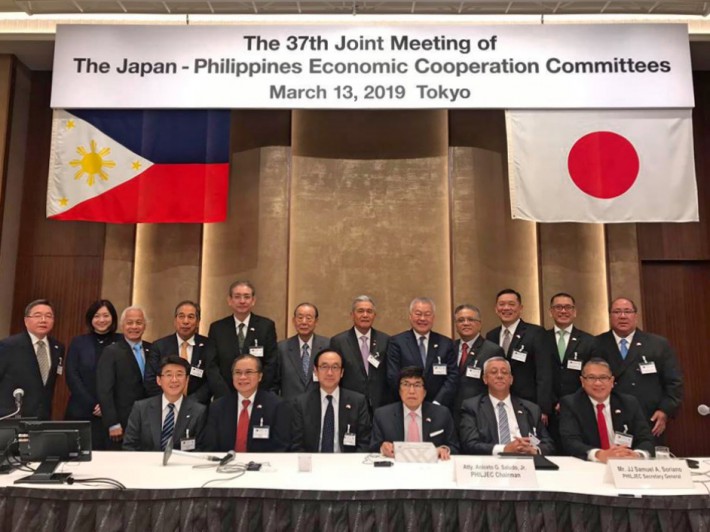 Two plenary sessions were held and attended by top executives from the Japanese and Filipino business communities. The first session focused on the theme “Tourism and Infrastructure Development” discussed by the following speakers:

The second session focused on “Human Resource Development and Exchange” which featured the following speakers:

The PHILJEC Delegation consisted of 74 delegates, one of the largest ever assembled for a Joint Meeting held in Tokyo. The night before the Joint Meeting, the visiting Filipinos were invited to a Welcome Dinner for the Philippines-Japan Society at the Imperial Hotel hosted by the Philippine Society of Japan led by Mr. Mamoru Sekiyama, Chairman and Ambassador Makoto Katsura, President.  On the other hand, JPECC hosted sumptuous lunch and dinner at the Tokyo Kaikan during the Joint Meeting. 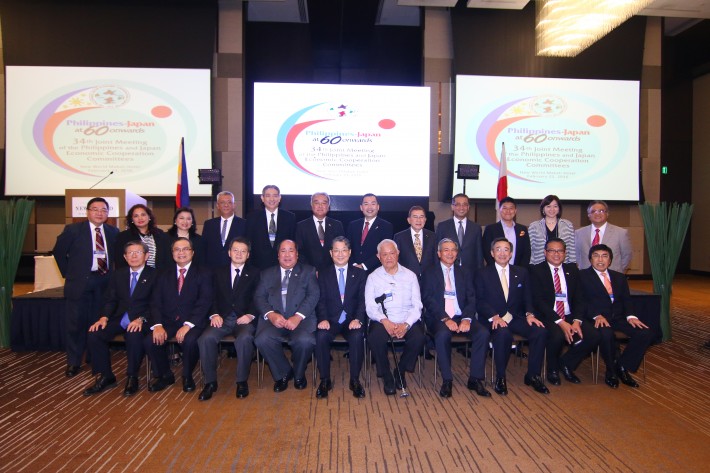 To commemorate the 60th Anniversary of the normalization of bilateral ties between Japan and the Philippines, this year’s meeting adopted the theme of “Philippines-Japan@60 Onwards,” and served as a forum for the discussion of socio-economic issues and collaborative ideas that will enable the two economies to effectively compete in the global market.

“We are profoundly honored that this 60th Anniversary [of the establishment of normal diplomatic relations] was marked at the first month of this year by the visit to the Philippines of their Majesties: Emperor Akihito and Empress Michiko,” Chairman Castillo remarked during his welcome speech.

Expounding more about the Emperor’s visit in the previous month, Castillo shared, “I, myself, was asked by His Majesty Emperor Akihito to keep helping enhance the business relations between Japan and the Philippines. In my mind and in my heart, His Majesty’s request is a most honorable command to me and to all of us in PHILJEC.”

Discussions in the meeting focused on issues affecting businesses in the Philippines and Japan: The socio-economic and monetary situation in the Philippines and Japan; the promotion of investment in automotive, electronics, power and science and technology industry in the two countries; and possible business collaborations that could help the two nations continue to be globally competitive.