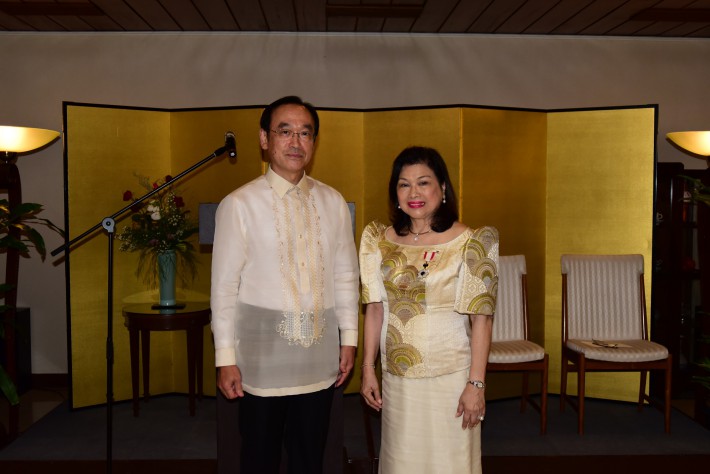 August 29, 2019by Philip Sanvictores in PJLA tagged Order of the Rising Sun

Ambassador Koji Haneda on behalf of His Majesty the Emperor of Japan conferred the award, which recognizes Ms. Loinaz’ contribution to promoting mutual understanding between Japan and the Philippines.  PJS President, Mr. Francis C. Laurel, in his speech, congratulated his sister who is fondly called “Ate Marilen” by her family. Mr. Laurel added, “Ms. Loinaz’ work with the Philippines Japan Friendship Foundation spans over two decades. And like our Father (Amb. Jose S. Laurel III), she worked tirelessly with steadfastness and precision. She did her job well and never waivered at any time. She was the quiet and diligent worker. All in all, she got the task at hand done well.”

Ms. Loinaz has been leading the PJLA for 13 years and continuous to spearhead various education and socio-cultural programs that promote exchanges between Filipinos and Japanese. She also leads the organization in various activities that help develop camaraderie between its members and non-members. 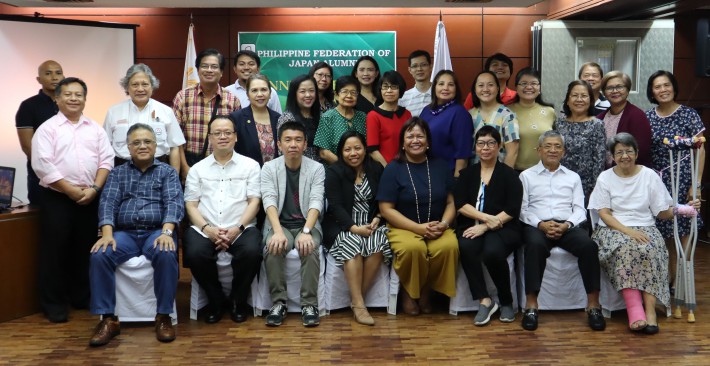 The Philippine Federation of Japan Alumni (PHILFEJA) held its Regular Annual General Members Assembly on Saturday, 27 July 2019 from 2:30-5:30 PM at the Philippines-Japan Friendship Hall at the Dominion Bldg. in Makati. The new President of PHILFEJA from the JICA Alumni Association of the Philippines (JAAP), Ms. Junelyn A. Pagunsan, presided over the Meeting.

After determination of the quorum and approval of the Minutes of the Meeting held on July 7, 2017, the Annual Report of the President followed. Mrs. Cecilia Tolentino, Secretary-General of PHILFEJA presented the Power-Point Report in the absence of the Immediate Past President, Atty. Powell del Rosario who is based in Capiz. Highlights of the Report were the activities of member Associations- APPAJU, JAAP, PHILAJAMES, PHILCULTAROS and SAPILNIP for fiscal year 2018. Also presented were the Conferences and Symposiums where PHILFEJA Officers and members participated:

Toshiba Youth Club Asia is a highly unique program that aims at fostering a network of next- generation Asian leaders with a long-term vision to sustain the future of Asia. Selected high school students who qualified through a nation-wide essay contest are Vivienne Angelica Viernes and Bertrand Michael Diola, both from Philippine Science High School. They participated in the program together with their attendant, Ms. Natalie Victorino of the Department of Finance.

The financial statements for the periods ending 31 March 2018 and 31 March 2019 duly certified by the independent auditor, Diaz, Murillo, Dalupan &amp; Company were also presented to the Assembly.

Pursuant to the provisions of the By-Laws, the election of the members of the Board of Trustees who shall serve during the ensuing fiscal year 2019-2020 was held. The remaining term of Atty. Powell del Rosario of JAAP as PHILFEJA President will be served by Ms. Junelyn A. Pagunsan who was elected during the JAAP elections early this year.

Other matters discussed were the forthcoming Asean Council of Japan Alumni (ASCOJA) 25 th Conference in Vientiane, Laos from October 4-6, 2019 which will be proceeded by the ASJA- ASCOJA-JAOL Symposium on Food Safety on October 3, 2019. PHILFEJA is sending Dr. Neil tan Gana of Ateneo de Manila as panel speaker. Speaker for the Conference will be Dr. Gilda Lasay-Uy of the UP School of Kinetics. Also mentioned is the National Institute of Youth Education (NIYE) Junior Program inviting 6 high school students 13-16 years old and one attendant from Brunei, Cambodia, Indonesia, Malaysia and the Philippines from November 18- 26, 2019 at the National Chuo Youth Friendship Center in Shizuoka Prefecture. Also presented is the proposed ASJA-ASCOJA-PHILFEJA Symposium in February 2020 with the topic “Fourth Industrial Symposium (FIRe)”.

Immediately after the Regular Annual General Assembly, the organizational meeting of the Board of Trustees was held for the purpose of electing the President and other officers and constitute the Execom.

The meeting was followed by Fellowship and Merienda.

(This article was written by Mrs. Cecilia Tolentino)

Newly installed PHILFEJA President, Ms. Junelyn Pagunsan and PHILFEJA Trustee Mr. Philip Sanvictores represented PHILFEJA at the ASCOJA Board of Governors preparatory meeting for the 2019 ASCOJA Convention held on June 22, 2019 at the Grand Palace Hotel in Luang Prabang, Laos.  The meeting was organized by the Japan Alumni Organization of Laos (JAOL), led by its President, Dr. Panya Chanthavong.

All the ASCOJA Chapters were represented during the meeting, with the exception of BAJA (Brunei Association of Japan Alumni).  Mr. Jiro Sato and Ms. Chikako Hagihara of the Asia Japan Alumni (ASJA) Secretariat, and Ms. Yuki Kamikawaji of the Embassy of Japan in Laos were also present.

The meeting tackled various matters relating to the forthcoming 25th ASCOJA Conference to be held from October 4 to 6, 2019 in Vientiane, the capital city of the Lao People’s Democratic Republic (Lao PDR), as follows:

Each ASCOJA chapter will be invited to present relevant papers for discussion during the ASJA Symposium on Food Safety and the ASCOJA Conference themed Sports for All, focusing on each country’s preparations for the 2020 Tokyo Olympics.

JAOL allotted time for PHILFEJA to present plans for the 2020 ASJA-ASCOJA Symposium to be held in Manila in February 2020.  Mr. Philip Sanvictores submitted the symposium prospectus which is entitled “Caught on FIRe (Fourth Industrial Revolution)”.

After the meeting, JAOL hosted an afternoon cruise of the Mekong River and dinner at a traditional restaurant at the river’s banks. 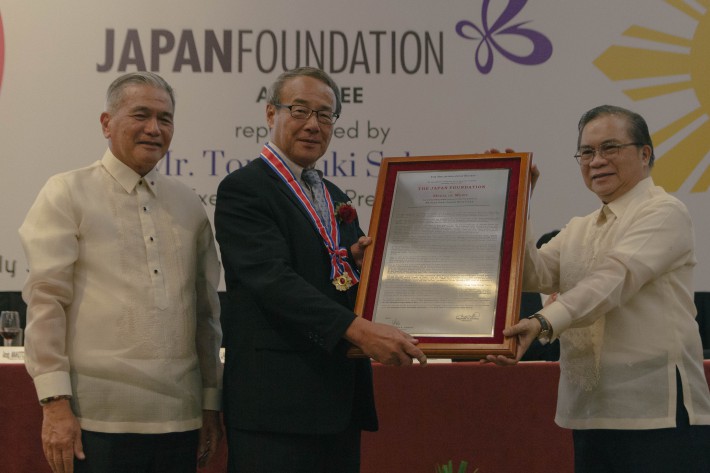 On July 31, 2019, The Philippines-Japan Society (PJS) conferred upon The Japan Foundation (JF) the 41st Medal of Merit for outstanding achievements and contributions in promoting and strengthening Philippines-Japan relations. During the formal awards night held at the New World Hotel in Makati City, PJS President, Mr. Francis C. Laurel and Vice-President, Mr. Gerard B. Sanvictores, donned the Medal of Merit to The Japan Foundation, represented by Executive Vice-President, Mr. Tomoyuki Sakurai and presented the plaque of the Citation, which was read by  Atty. Jose Vicente E. Jimenez, PJS Corporate Secretary.

Since 1997, JFM has been a close and active partner of the Philippine Institute of Japanese Language & Culture Foundation (PIJLC) and Nihongo Center Foundation (NCF) specifically in the field of Japanese language education and training. PIJLC and NCF operate under the aegis of The Philippines-Japan Friendship Foundation (PJFF), an affiliate of PJS. One notable, long-running collaboration has been the 6-month Intensive Japanese Language Program for Filipino Nurses and Care Workers under the Japan-Philippines Economic Partnership Agreement (JPEPA) program. Filipino Nihongo teachers under PIJLC and NCF have also received grants and participated in training programs at the foundation’s offices in Urawa and Kansai.

As stated on the MOM citation:

“Indeed, the vision, mission, and advocacy of the Philippines-Japan Society and all its affiliated Philippines-Japan friendship associations, including both the PIJLC and NCF, are markedly aligned with those of The Japan Foundation, making us natural partners in our shared quest for peace, prosperity, and strong partnership between our two countries through genuine and close friendships between the peoples of Japan and the Philippines.”

Read the full Citation of the Medal of Merit presented to The Japan Foundation here.

In his acceptance speech, Mr. Sakurai conveyed how the foundation is greatly honored by the recognition and how he feels that the relationship between Japanese and Filipinos is at its golden age— its closest and friendliest ever.

“…on behalf of The Japan Foundation, l would like to express our sincere gratitude to the Philippines-Japan Society for awarding us with such a prestigious medal of merit.”

“…the conferment of this medal of merit would not have been possible without the enormous contribution of many highly-capable and talented Filipino staff members since the establishment of The Japan Foundation, Manila in 1996.”

“I feel that the present relationship between Japanese and Filipinos is at its closest and friendliest ever. We are blessed with a golden age in Japan-Philippines relations.”

Ambassador Makoto Katsura, President of The Philippine Society of Japan, spoke at the awards night, while the greetings of H.E. Koji Haneda, Ambassador Extraordinary & Plenipotentiary of Japan to the Philippines were read by Minister Atsushi Kuwabara, Minister and Consul General of Japan in the Philippines. The Philippines-Japan Ladies Choral, led by Maestra Teresita A. Santos,  delighted the guests with their medley of Filipino and Japanese songs. 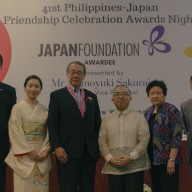 Mr. Tomoyuki Sakurai with officers of the Japan Foundation Manila 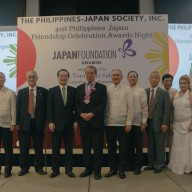 Mr. Tomoyuki Sakurai with members of the Philippines Society of Japan 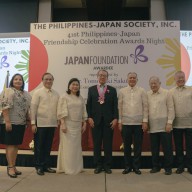 Mr. Tomoyuki Sakurai with the Board of Trustees and Officers of the Philippines Japan Society 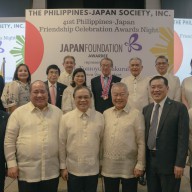 Mr. Tomoyuki Sakurai with the Board of Trustees and Officers of PHILJEC 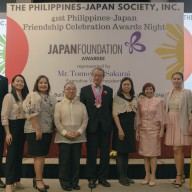 Mr. Tomoyuki Sakurai with NCF-PIJLC teachers who were grantees of the Japan Foundation Teacher Training Program held in Japan 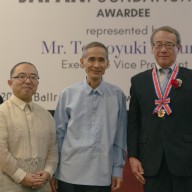 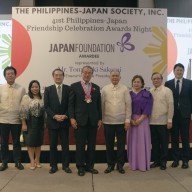 Mr. Tomoyuki Sakurai with Heads of the affiliated organizations of the Philippines Japan Society 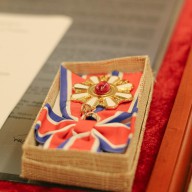 The Medal of Merit 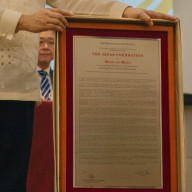 The Plaque of the Citation

PILJC and NCF students taking the JLPT on December 1, 2019 can receive a registration fee rebate upon passing the test. Those who are currently enrolled or have finished a course in 2019 are eligible for this financial incentive.

Interested students are requested to submit their exam voucher by November 29, 2019. A check equal to the registration fee paid will be issued by NCF within a month after receiving the student’s score report and certificate.

For complete details on how you can avail of these financial incentives, please read the mechanics below or you may also contact NCF or PIJLC branches. 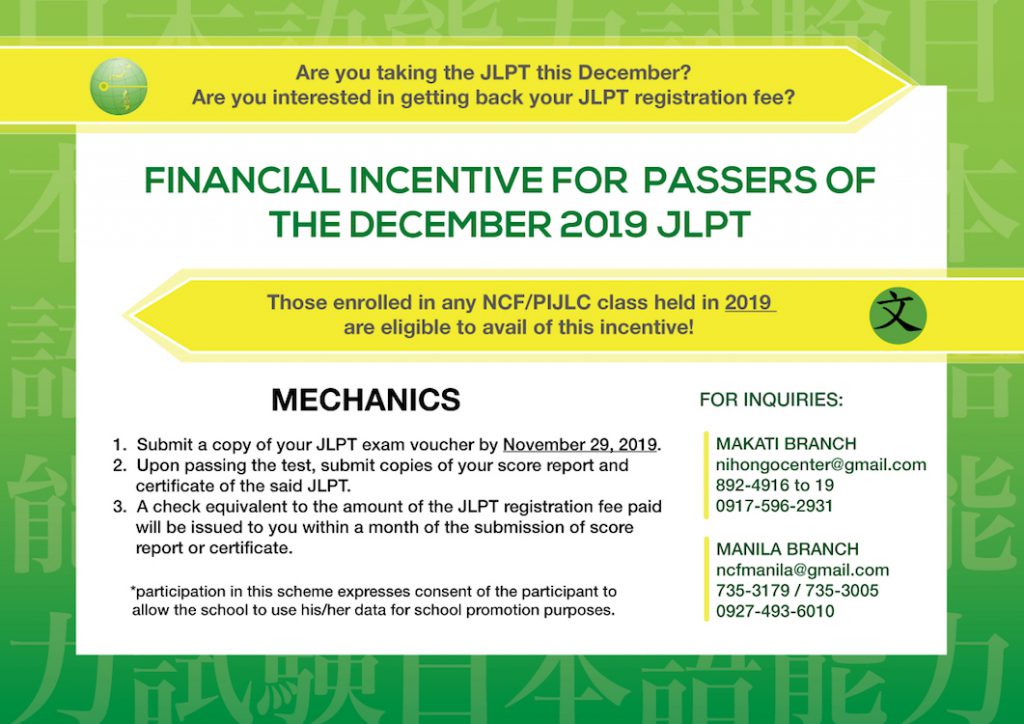